skip to main | skip to sidebar

Sorry for my creative angst this week! (or how an anagram I tweeted went mad!) 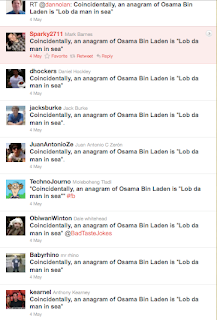 I had a bit of a rant on twitter this week when my creative angst perhaps got the better of me when I saw one of my tweets repeated over and over again, word for word without crediting me. Here’s the story, including how someone tracked me down out of the blue because of it.

Generally when I tweet a joke I get perhaps half a dozen retweets, i.e. exact reproductions of my tweet with my name preceding the message. This joke “The male fox has one mate for life. If she dies he stays single. The female, on the other hand, gets a new one. Usually in my garden at 3am” was a recent exception to the rule when it got 17 retweets - nosebleed territory for me!

So, maybe you can, or maybe you can’t imagine my frustration when following my tweeting - Coincidentally, an anagram of Osama Bin Laden is “Lob da man in sea” - last Monday, the same day the news broke about his death, that whole tweet of mine was, during the course of the following week, reproduced word for word, comma for comma, speech mark for speech mark, not ten or twenty or even a hundred times, but literally thousand upon thousand.

The first few were straight retweets where my name was shown as the originator, but very soon it seemed to turn into a cut and paste free for all with people simply taking the whole tweet and failing to mention where they got it from! And, just to rub salt into the wound, someone informed me later in the week that the gag had been aired on a popular tv show the previous evening!

Now, I am not so naive as to assume that no one else in the world thought of the same anagram (see below an explanation about how I came up with it). It's quite possible a few people did, but this Google timeline http://lpr.st/m2aSrN shows quite clearly that I was the first person to put the gag online and that many have since simply copied,not just the anagram, but the whole tweet verbatim without crediting the originator.

It's no biggie at the end of the day (though I am reminded of the recent fuss over celebrities claiming their jokes are sometimes nicked by other people) but one fellow anagram fan, a certain Judson Pewther from New York, having seen that my tweet had been reproduced word for word a phenomenal number of times without credit, took it upon himself to track me down. I received this email message from him earlier today:

I stumbled across your anagram of "Osama bin Laden" on the Web, while searching for an anagram of "Osama bin Laden buried at sea." I did a Google search for the exact words "Lob da man in sea" and saw that Google estimated over 7000 results. Looking at a few of them, I couldn't figure out how to find the real author. Anyway, I agreed that the anagram was very funny and worth repeating, so I posted it at the Usenet newsgroup alt.anagrams, explaining that I didn't know who originally created this anagram.

However, tonight I tried searching some more, and found a website where you were complaining that 1000+ people had re-tweeted your anagram without giving you credit, and where you provided a link to a Realtime Google search showing that you were the first to tweet the anagram. So I added another message to my thread at alt.anagrams, giving you due credit.

How flattering that he empathised with my creative angst and went to all that trouble to find me!

Now, some people have said you can't claim licence over an anagram and that anyone could have come up with a funny line using the name Osama Bin Laden. That is true to an extent, but to me, the difference between finding a funny anagram i.e. Adolf Hitler = 'Fart? Do I hell!' and a topical one that actually has relevance to a news story, is crucial.

To this day I remember the perfect example of an anagram that hit the spot when Nigel Lawson was the Chancellor of the Exchequer and the country was going through a recession. The anagram was ”We all sign on” – it entirely summed up the state of affairs at the time. It was simply fortuitous and opportune. You can’t always make a funny and topical statement. The best anagram I can get from David Cameron is “Random advice’, and you try making ‘Nick Clegg’ funny. Gideon Osborne? (that’s his real name before he changed it to appear more street wise) Slightly better - “Go soon, inbreed” – sound advice but no cigar winner.

The name ‘Osama Bin Laden’ throws up an astounding 71,793 anagrams which in itself doesn't make matters easy. Clearly I could not have trawled through all of them and indeed, even if I had had the time, the likelihood of getting the exact phrase would be remote. Anagram servers are great but they don’t generally deliver the results as actual sentences. What's more, 'da' is not even recognised as a word by anagram servers. So, what I did was an advanced search for anagrams containing the word 'sea' just to see if it was possible to get a topical joke. Even then the line didn't come up in the 693 results. I did, however, spot the word 'lob' contained within a few of the results and, with a bit of jiggling around and using 'da' as in 'you da man' I eventually got the line I was looking for. It just happened to be topical and described what actually happened.

If I had opted for another of my shortlisted options, ‘Amen, Sandal Obi’, or any of the other possibly slightly funny but not topical combinations, I doubt my tweet would have been repeated more than my usual half a dozen times. And that, at the time, was the reason for my creative angst. Sorry!
Posted by Alconcalcia at 11:59 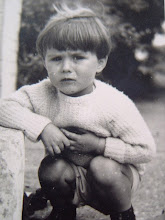 Alconcalcia
Freelance copywriter & comedy writer. With a career in advertising that spans working at newspapers, a media sales house and several well-known recruitment advertising agencies, I have been both a sales executive and an advertising account handler up to Group Account Director level. During my years at ad agencies I dealt with recruitment advertising accounts across pretty much every business sector, including working with numerous recruitment consultancies of all sizes. Just over eight years ago I made a big career change by taking redundancy, giving up corporate life and becoming a combination of freelance copywriter, sometime comedy writer and part-time house husband. I had, throughout my career, had a flair for writing copy, sometimes on the fly over the phone as a telesales executive and sometimes when at agencies to help out a colleague facing a pressing deadline. I had also taken hundreds of briefs and worked on countless recruitment advertising campaigns, so it was no biggie to actually go from being a 'suit' to a 'creative. I was also quite looking forward to spending quality time with my newborn son - mad sentimental fool that I am!